On Sep.13th 2020, the  CENI-HEFEI  led by Department of Automation (short for our department) was officially opened at the 2020 3rd International Conference on Hot Information-Centric Networking (HotICN 2020) in Hefei.Yunjie Liu, the academician of Chinese Academy of Engineering & dean of Jiangsu Future Networks Innovation Institute; Yiwu Da, the party member &chief engineer of Anhui Provincial Development and Reform Commission; Wensong Wang, the member of the  Standing Committee of the Hefei Municipal Party Committee & the executive deputy mayor of Hefei City; Xisheng Luo, the standing committee member of the Party Committee & vice president of USTC, along with other relevant municipal departments, relevant universities and enterprises' leaders participated in this opening ceremony. Feng Wu, the assistant to the principal of USTC and executive principle of Institute of Artificial Intelligence, Hefei Comprehensive National Science Center, chaired the ceremony. Later on, Prof. Jian Yang of our department hosted the 2020 3rd International Conference on Hot Information-Centric Networking.

The China Environment for Network Innovations(CENT) is the first major national scientific and technological infrastructure construction project in the field of communications and information science, as well as one of the 16 fundamental infrastructures initiated during national Second Five-Year Plan. As the project undertaker, University of Science and Technology of China(USTC), the foundation of CENI-HEFEI means the first future intelligent science and technology test device officially landed and started, indicating the national future network officially qualified with intelligent network test service, as well providing the reproducible, measurable and verifiable innovation environment for national intelligent network to cross the maturity barrier.

During the ceremony, the vice president Xisheng Luo expressed warm congratulations on the convening of this international conference and opening ceremony on behalf of the USTC, extended a sincere welcome to the guests attending the event, and expressed great thanks for the National Development and Reform Commission, the Chinese Academy of Sciences, Anhui Province and Hefei city for their deep care and support to USTC.

The vice president Xisheng Luo expressed that USTC is the university founded for developing Two Bombs and One Star. Besides the feature of Devotion to Science and Technology with Deep Love for Motherland; Combination among Departments and Institutes for Educating Talents, another major feature of the USTC is the place where filled with huge scientific installations. USTC has successively established or co-built National Synchrotron Radiation Laboratory, China's Steady High Magnetic Field Facility, Keda Torus eXperimen, Laboratory for Future Networks, and high-precision ground-based timing system, etc. The installment of these large scientific devices has attracted a large number of professionals and trained many a top talent, producing a number of world-influenced research fruits, forming a agglomeration effects research platform, which can be described as a country's important weapon.

The Deputy Mayor Wensong Wang, said that the open of  CENI-HEFEI marks the completion of another major national scientific facility for the Hefei Comprehensive National Science Center which is precisely on its fourth anniversary. He also stressed Hefei is one of the four comprehensive national science centers and the first batch of cities to be constructed by the national laboratory. It has become an important force to push the country's technological innovation and self-reliance.

Opening the CENI-HEFEI is Hefei's innovative measure to lay out the intelligent network industry and seize the development opportunities of the intelligent network industry. Pursuing innovation and creation, Hefei will usher in the 14th Five-Year Plan of the acceleration of the innovation of emerging industries including intelligent networks, the improvement of the urban traffic environment, the acceleration of infrastructure construction, and the accumulation of population resources. Hefei will once again hug this major opportunity to obtain substantial leap, and the increasing regional value.

Academician Yunjie Liu expressed his warm congratulations on the smooth convening of this international conference and the opening ceremony of CENI-HEFEI. Cyberspace has become the fifth frontier of mankind after land, sea, air and space. Countries around the world have attached great importance to the layout of the future network from the national strategic level. The development of future network technology will play a key supporting role in the development and construction of national network power and manufacturing power. Therefore, we must seize this opportunity, establish an industrial ecosystem, and promote the development and application of future network technologies. It is foreseeable that the CENI-HEFEI will build an advanced, open, flexible, and sustainable test facility. Let us look forward to more breakthroughs brought by CENI-HEFEI.

Afterwards, the conference held the opening ceremony of the CENI-HEFEI. Yunjie Liu, the academician of Chinese Academy of Engineering Institute; Wensong Wang, the executive deputy mayor of Hefei City; Yiwu Da, the chief engineer of Anhui Provincial Development and Reform Commission;  Xisheng Luo, the vice president of USTC and Weidong Chen, the general party secretary of School of Information Science and Technology of USTC attended the opening ceremony. 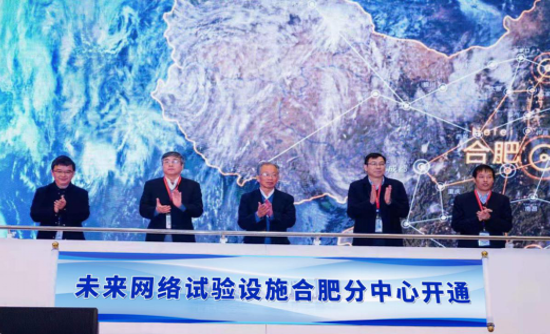 Yunjie Liu made the report titled  Challenges and Technique Trends for Future Networks after the ceremony. During this speech, he elaborated the development trend and major challenges of future network technology. Zhaoxiang Huang, senior expert from China Electronics Technology Group Corporation, pointed out the development status and existing problems of the world-ground integrated network in his speech  Universe Network Protocol. 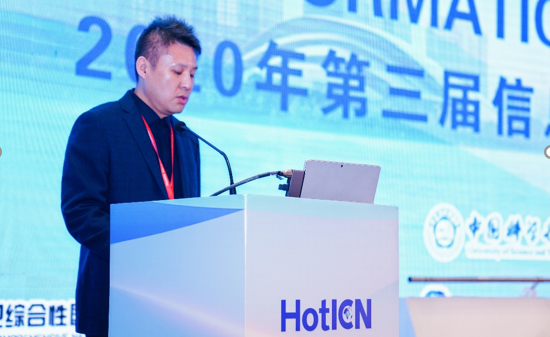 In the afternoon, members from four participating units visited control hall and computer room of CENI-HEFEI introduced by Prof. Yang.  After the visit, the Four-side Conference on the construction of CENI was held at the Institute of Advanced Technology, University of Science and Technology of China, expounding how to further develop  CENI-HEFEI . The above four sides are the Jiangsu Future Networks Innovation Institute, Institute for Network Sciences and Cyberspace of Tsinghua University, USTC and Shenzhen Academy of Information and Communication Technology. 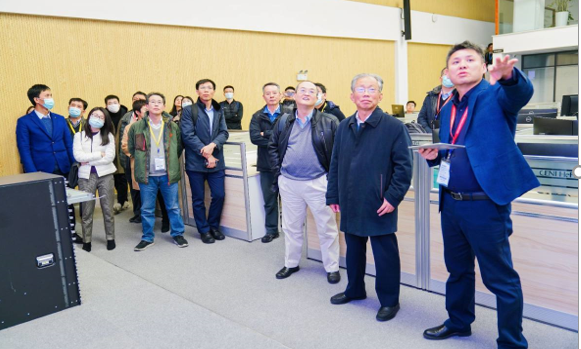 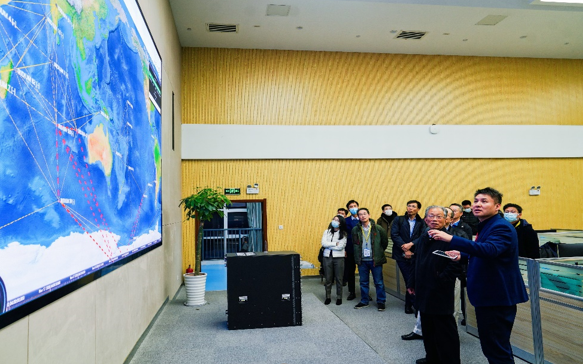 The open of CENI-HEFEI marks a major milestone in the construction of the Hefei branch of the national future network and the start of trial operation in this field. It will further promote scientific research, industrial transformation, and application services in the field of intelligent networks to make new breakthroughs. It also indicates the control science and engineering discipline of our department has stepped the front-line team serving the research &development and operation of future network test facilities.